Home NEWS Peter and his Rockets 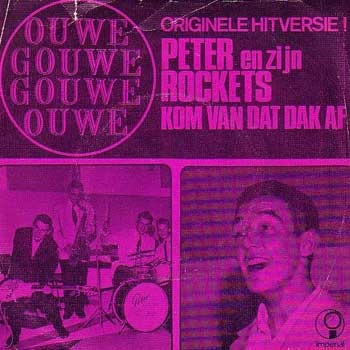 In a couple of weeks’ time, the Netherlands Top 2000 fever will be rising in the entire nation: voting has started. A week long, the radio station ‘Radio 2’ will try to get your vote for this year’s edition of the hugely popular ‘best of all time’ hit list. And I’m glad I am in the position to point out some glaring omissions in the hit list to you.

In last year’s edition, the first ever Dutch-language rock ‘n roll song was missing. Yes, it really was. It might have the iconic status of Bill Haley’s (We’re Gonna) "Rock Around The Clock" or Little Richard’s "Tutti Frutti" (both songs were actually missing in last year’s Top 2000 edition as well), but "Kom Van Dat Dak Af" (which you could translate "Get Down The Roof") certainly is a Dutch rock ‘n roll classic. It was composed by Eindhoven musician Peter Koelewijn. He wrote the song in 1959 as a joke. Back in those days, his older brothers used to call out to somebody in the street (‘hey!’), who would then look at them, while the brothers looked up, pretending something was happening on the roof. Well, it’s an acquired taste of humour.
It wasn’t supposed to become a hit.

Peter Koelewijn and his backing band, called ‘The Rockets’ (actually, it was supposed to be a longer name, but when painting the name on the drum kit they figured out there wasn’t enough room for a longer name), were able to record a couple of songs in a studio in Heemstede in 1959. The band travelled to the studio by train to record two other songs, but on the way there they practiced Koelewijn’s latest composition, "Kom Van Dat Dak Af". It was duly recorded during a three-hour session, which was considered an eternity.
It wasn’t released at the time, but when Dutch radio-DJ Co de Kloet accidentally came across the song some time later, he demanded the record company to release the single immediately. The record company was smart enough to do so and De Kloet started playing the song on high rotation. It became a huge hit in the Netherlands and nowadays it is regarded as the first big Dutch-language rock ‘n roll hit.

Koelewijn and his backing band had several other big hits and the singer has been successful as a producer as well. He even convinced football player Johan Cruyff to record a song ("Oei, Oei, Oei, Dat Was Me Weer Een Loei"). Apparently, the football player was such a bad singer the studio cat fled outside.

Recently, Koelewijn has been in the news because of the court case against A. F. Th. van der Heijden. In his latest novel, ‘De Helleveeg’, Van der Heijden states that Koelewijn’s parents’ fish shop was a ‘stinkhol’ (a smelly place) and that an aunt of his used to practice abortion in an apartment above the shop. Koelewijn lost the case.