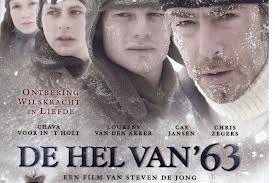 De Hel van ’63 or The Hell of ’63 is a Dutch film about the Elfstedentocht (the Eleven Cities Ice Skating Challenge) that is packed with drama and action making it easily comprehensible to non-Dutch speakers with only the basic skills in the language.

The Elfstedentocht takes place on a 200 km stretch of natural ice that connects the eleven towns in the northern Dutch province of Friesland. There is however a catch that only serves to enhance the popularity of this highly anticipated sporting event. The race is by no means an annual occurrence, weather conditions have to be cold enough to create a strong and solid icy surface over the canals and lakes that make up much of the skating route. Once the ice passes muster of the ice-masters the whole event unfurls quickly within the next couple of days. The twelfth such race that took place in 1963 was a particularly hard one. Sub-zero temperatures and icy blizzards took their tool with more than a thousand participants injured or struck with frostbite. Only 1% of all participants made it across the finish line.

The film is based on true events and portrays the determination of four young people to fight extreme weather and complete the race. As events begin to unfold in the Elfsteden committee room and Elfsteden-mania grips the country, the audience is introduced to the motives which push each of the central characters to undertake this challenge. For them the race becomes life-changing, not just metaphorically but in a more immediate and real way. The film can be criticized for its very simple storyline and its failure to invest true depth to its characters. Furthermore, considering one of the main characters is female, it gives no clue about the status of women in this contest. In fact, apart from our lone female skater, one doesn’t really see other women actually participating in the race. Nonetheless, The Hell of ’63 is a well made film, technically sound, and a treat to watch. The film pulls you in and makes you an actual spectator rooting for the skaters!

The film comes close to being Frisian born director Steven de Jong’s cinematic tribute to those who undertake this skating tour – a feat of determination, endurance and will-power in the best of circumstances and nothing short of a trip through hell in the worst! The 1963 tour was also the first live televised event in the Netherlands. Since then the Elfstedentocht has taken place thrice, in 1985, 1986, and 1997. The cold spell earlier this winter had already raised hopes of another race and optimists continue to insist that there is plenty of winter left and the possibility of another cold snap cannot be discounted. Why not prepare yourself and watch the film? (The film is currently playing at Zien Service Bioscope at Keizersgracht 19, 5611 GC Eindhoven.)