Flights at Eindhoven airport were disrupted on Tuesday morning due to the dense fog. More often than some other airports, fog disrupts flights at this  Airport. This is because the requirements for landing and taking off are stricter here. However, improvements are in sight: Eindhoven Airport will receive new equipment in and around the runway in 2025, making it possible to fly in dense fog.

Planes landing at Eindhoven airport need a minimum visibility of 550 metres, which means that the airport falls into category 1. By comparison, Schiphol is much better equipped with lighting and other measures and therefore falls into the highest category, i.e., 3c, meaning that the aircraft are allowed to land here with a visibility of at least 75 meters.

In order not to break open the runway twice, the Instrument Landing System (ILS) will be installed in 2025 when major maintenance is already planned. The ILS is a radio navigation system that pilots use to land. Using this system, a precision approach to the runway can be performed.

The ILS has three categories, with category IIIB being the most extensive. Eindhoven Airport will receive category III. It is possible to land at airports with this category of ILS without a view of the runway. 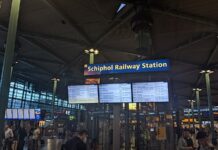