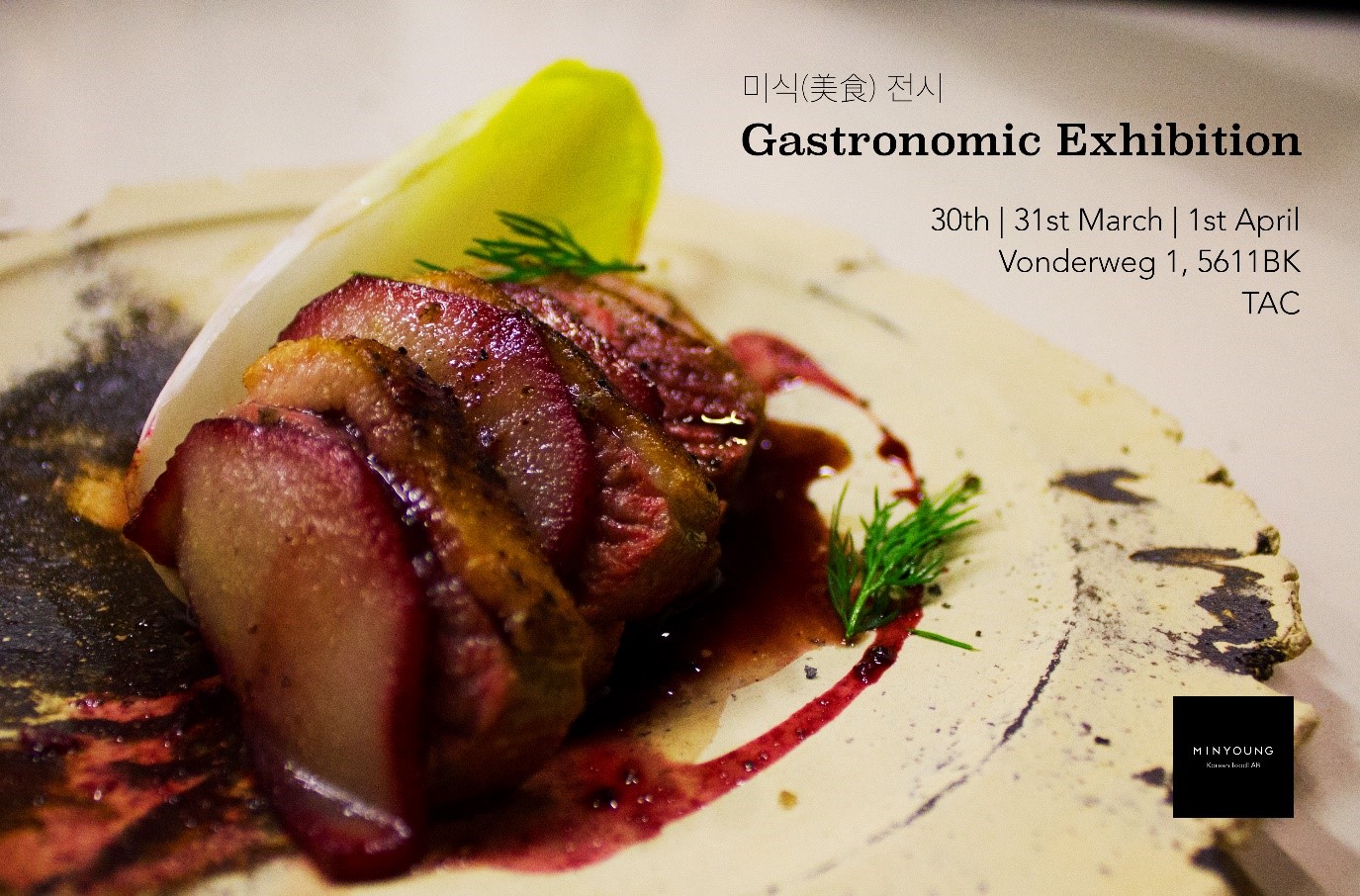 A Korean-Dutch dining event will be held for the third time during Dutch Design Week on the 22nd, 23rd, and 25th October at Temporary Art Center. A three-course meal (appetizer – main dish – dessert) will be served through two and a half hours each day. Organized by 8 students from the Design Academy, the event focuses on both the food and the design performance at the same time.

In the 17th century, there was a Dutch sailor named Hendrick Hamel (1630-1692). Not a lot of Dutch people know who he is, but Hamel is quite famous in Korea for being the very first Western person to ever set foot in Korea. While staying in the strange place for 13 years, he wrote about his experiences there, which according to his book is nothing like he ever saw before.

MinYoung Choi (28), the coordinator of the dining event <First Impressions>, got her inspiration from Hamel’s story. She is a student at the Design Academy and the owner of the Korean restaurant in Eindhoven – MinYoung’s Korean FoodLAB. As a designer and a cook at the same time, she ambitioned to put together art and food in one event. “I wanted to build a platform where I can communicate design with people, and I use food as a platform subject”, Ms Choi said. 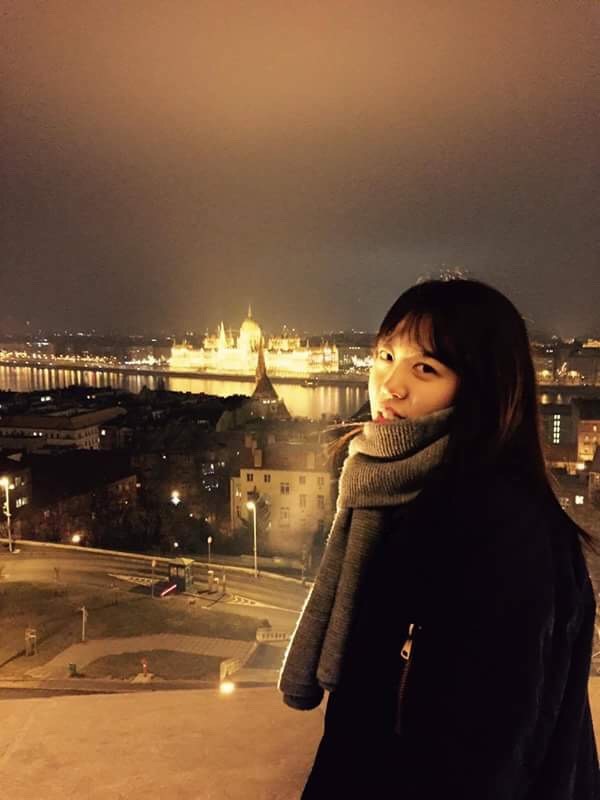 First Impressions – “Be your own Hamel”

Ms. Choi imagined how Hamel would have felt when he first arrived in Korea. For her, the Netherlands is the first and only foreign country she has ever been to. She still remembers the first impression she got from Holland. Everything looks different, works differently, and the vibe the country gives off feels so exotic. Ms. Choi could relate to how shockingly exotic Korea could have looked to Hamel’s eyes since she experienced how different the Netherlands was to her. Inspired by him, Ms. Choi wanted to share these feelings with others in her own way: holding Korean dining events combined with art shows.

“That is also one of the reasons I opened a Korean restaurant in Eindhoven”, Ms. Choi said. “Korean food is relatively unknown to Dutch and international people. Eating at my restaurant and coming to the events, I hope, will give them a new experience and the first impression of Korea.”

She explained that the first impression is the main focus of this project. “We have 8 people participating in this project together, 4 Dutch and 4 Koreans”, Ms. Choi said, “while brainstorming about how to link Korea with the Netherlands, we got the idea that each one of us should try to be our own Hamel, meaning we should try to focus on how it had felt at first to experience each other’s culture. We decided to put together all our impressions into this project”. That is how they got the name of the third edition: First Impressions. 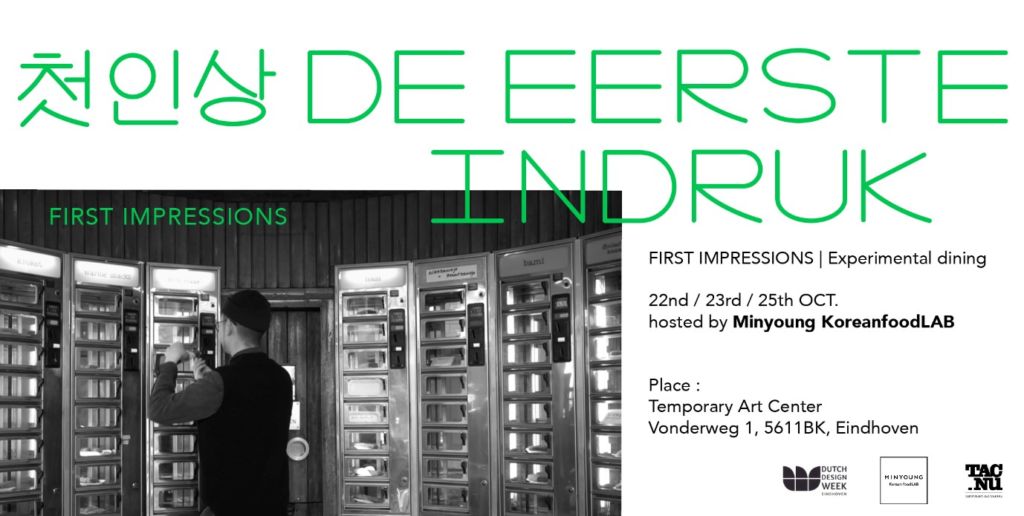 Communicating artists to the external world

Aside from Hamel’s inspiration and first impressions, what Ms. Choi desires the most to achieve is to build a platform that bridges between artists and non-artists. “I know there’s a big discrepancy between designers (artists) and non-designers, for example, in the way we think or how we process the reality around us”, said Ms. Choi. “It could be difficult for people to make sense of how artists are. We could just seem crazy. I wanted to build a platform where I can throw dining events as well as communicate about how artists process the world and think”.

As a communication major at the Design Academy, Ms. Choi notes the importance in art products being successfully understood by various people. “So many art products created by designers can seem extremely random and not relatable, and it means that they failed to communicate their idea to other people”, said Ms. Choi. “The platform hopefully mitigates this discrepancy. Food is such an easy thing for everyone, and I thought if I use food, it could be easier to communicate”.

It must be very important for artists and designers to balance between making art that they like and that others like. According to Ms. Choi, it’s a dilemma for all the students at the Design Academy to decide whether their designs are practical enough to be on the market or not. At the Design Academy, they get trained to build strong identities of their own to be reflected in their art, but then they also have to decide if what they design is practical. “That’s another reason I wanted to build a platform where we can solve this dilemma”, Ms. Choi said, “it’s my attempt to explain that art is something that can be understood”.

Ms. Choi asked not to introduce the menu in the article since the concept of the project is to see a whole new perspective without expectations. Therefore, these are some pictures from the last event instead. 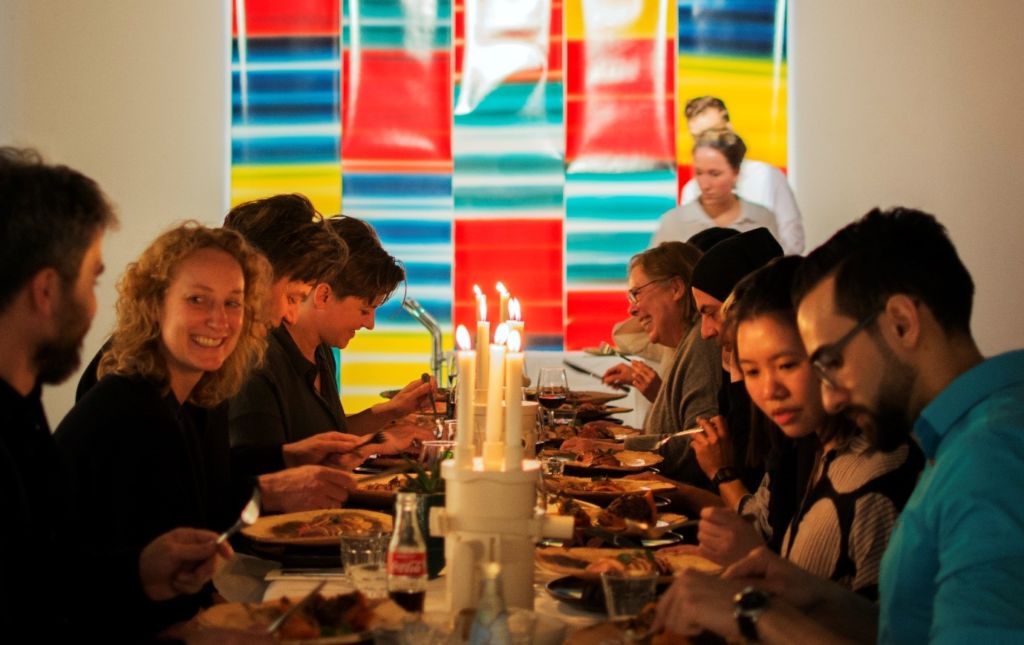 A photo from the last dining event. 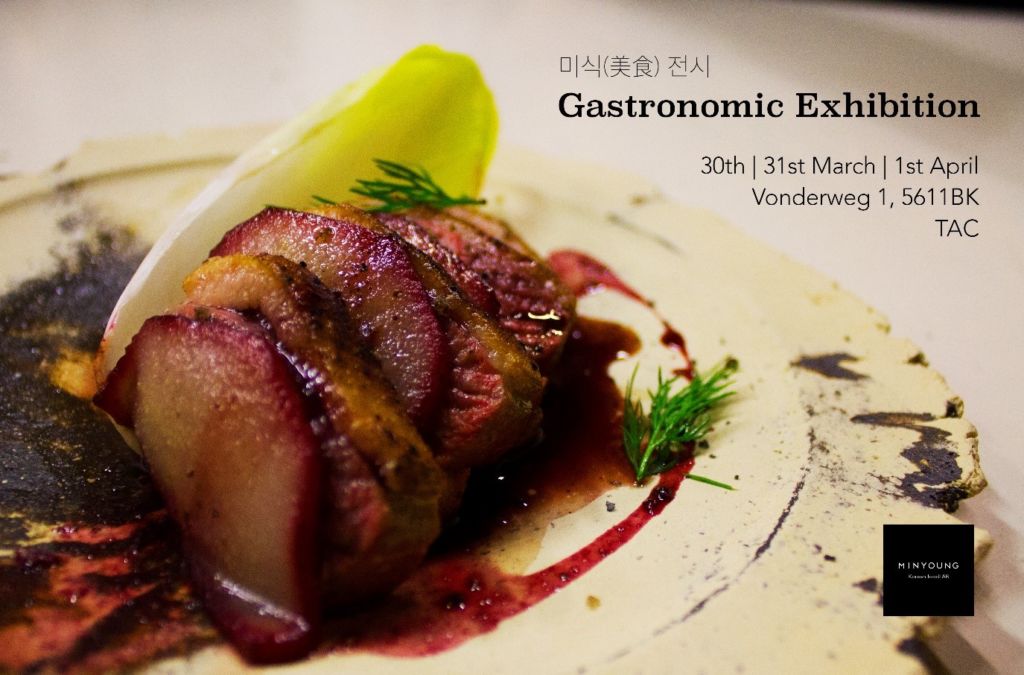 Redwine-poached pears with Duck Breast was the main dish from the last dining event. 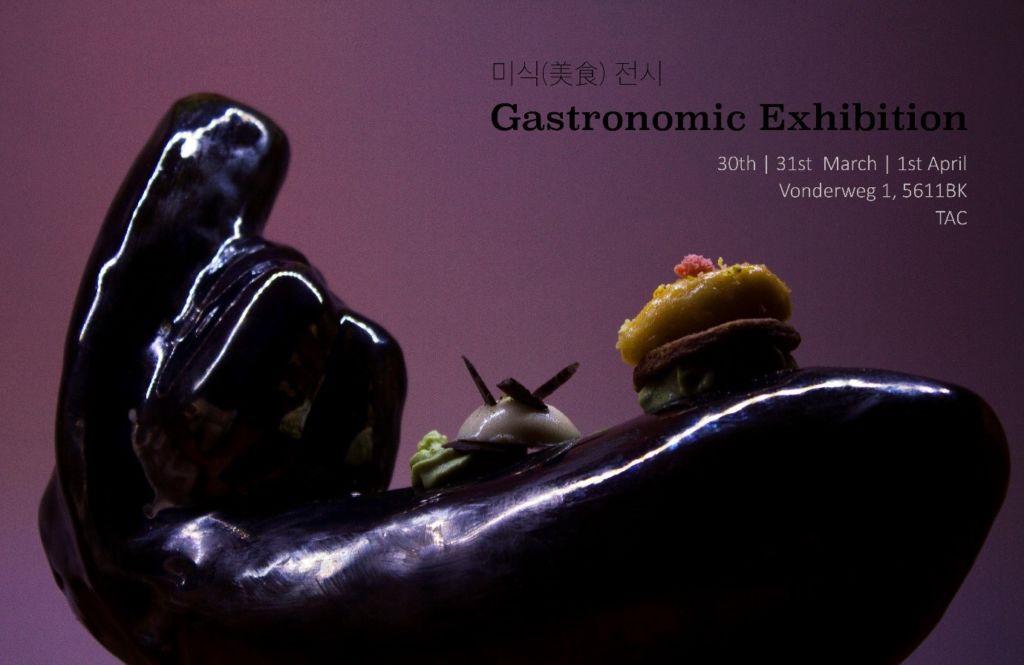 I have been to MinYoung’s Korean FoodLAB in the past. The restaurant doesn’t look like a normal one, because it is located in an eccentric place for a restaurant: inside of the Temporary Art Centre, more specifically, in the middle of all kinds of abstract art products exhibited around tables. 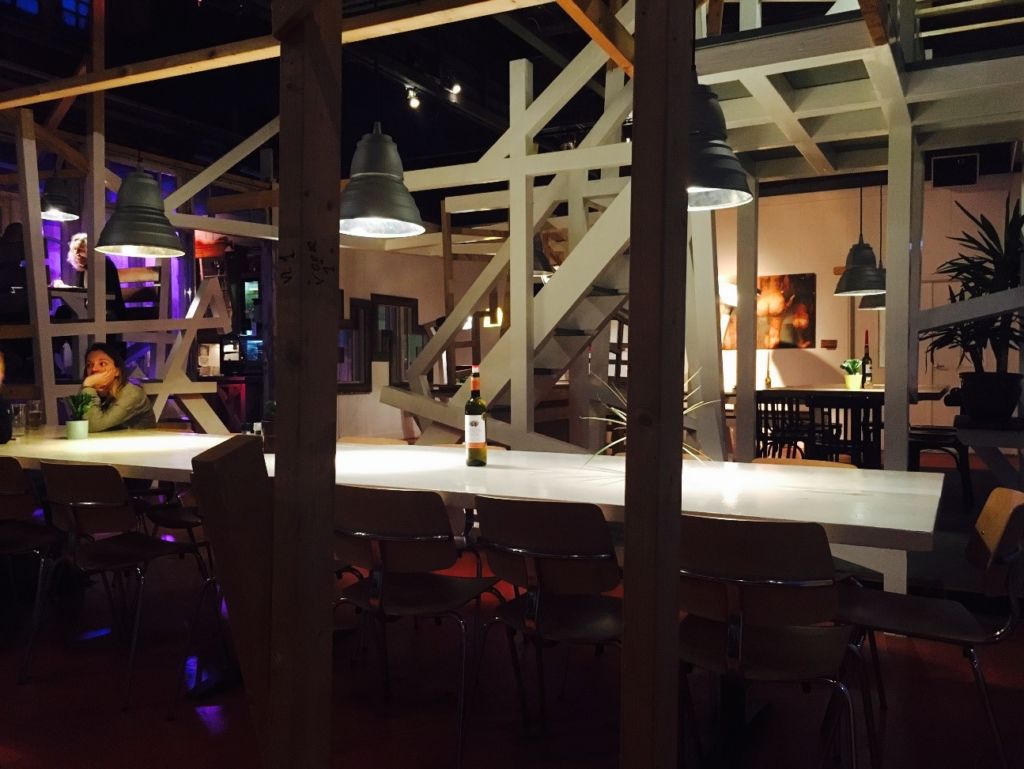 As a Korean myself, there seemed nothing exotic or new about having Korean food at a Korean restaurant. However, it was indeed a new experience to eat Korean food while surrounded by contemporary arts. Ms. Choi’s whole concept seems unique in that sense: it is not just about consuming food, but also about experiencing art. Given that both the restaurant and the dining events are run in the same place, I’m sure visitors will see a new perspective through the event.

As much as Korea is not well-known in the Netherlands, Koreans are also not very familiar with Dutch society or culture. Whenever I tell people in Korea that I’m living in the Netherlands, they say, “ah, tulips and windmills!”. Same goes for Dutch people. When I introduce myself, and say I’m from Korea, many people ask, “North?”

Based on that, I assume Korea and Holland are not that close yet, which is a pity because I can confidently say that the Netherlands is a great country with so many things to learn from. At the same time, Korea also has a rich culture and history, which I am very proud to introduce to Holland.

In that sense, there is a great value in Ms. Choi’s attempt at introducing Korean food culture in the Netherlands. Just like Hamel did in the 17th century in Korea, she is trying to contribute to two strange countries getting familiar with each other. I hope visitors get a new experience with Korean food, along with Korean culture, through her dining events.

Eindhoven cultural sector begs for extra money: ‘It squeeks and it...