The moderator Jean Paul Close opened the evening with his talk on Dutch democracy and how the French had a noteworthy influence in the shaping of Dutch democracy. When Napolean Bonaparte left in 1810 a wholistic  Dutch democracy would follow. The three key principals which form the basis are Freedom, Equality and Brotherhood/sisterhood. These principles form the basis of political party ideologies and their election manifesto. Close also mentioned that women in the Netherlands have had voting rights since 1910.

The political parties choose a position to align in the spectrum which is formed on basis of the founding principles. Sometimes the parties move towards a key principle. The important governing issues with Freedom is that the individual comes first and capitalism/entrepreneurship and liberalism go hand in hand. The parties that hold Equality as the most important principle hold the government more responsible and the outlook is social with an emphasis on sharing and equality. Political parties that put brotherhood (let’s call it sisterhood too from now on) as their top priority see participation in society and togetherness as a group, have often religious influences and have a more conservative approach.

In the Netherlands, there are three tiers of government, namely the national, the provincial and the local level. Jean-Paul Close threw light on the challenges facing today’s politicians. Healthcare which was previously under the national sector is now the responsibility of the municipal government. The other major challenges are environment and sustainability and the ageing population. 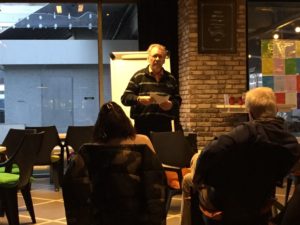 Eindhoven with a population of 220,000 has 180,000 eligible voters and there is an average voter turnout of 40 percent. This means around 72,000 people will be going to vote. How many international people exactly are going to vote is not clear. Eindhoven has 45 council seats up for grabs on March 21 this means parties need about 1600 votes per seat in the council. If all eligible internationals exercise their voting rights, they could account for several seats!

You would have received your Stempas or Ballot by post already. Along with that carry your ID and please do vote in one of the neighbouring polling stations. For the map of polling stations in Eindhoven have a look here.

The official results are usually determined by the municipal central electoral committee in open session two days after the election day. However, on the evening of the election day, preliminary, non-official results are presented in the media. After the elections, the coalition agreement is made and there is a consensus on who is in charge of different portfolios and how the implementation of plans are going to be made. The downside of the coalition is that only a fraction of the big promised dreams can be practically arbitrated. But on the positive side, the impact would be fair enough not to adversely affect any segment of the citizens.

The internationals from different walks of life expressed their views and opinions in an open forum. Praveen K. from Voice of Expats felt that the internationals could not identify with the portfolio of the various political parties and expressed the need for more clarity since that would give directions to the expats who could vote.

Irene Martens from Eindhoven News spoke about the extensive information available in English on Eindhoven in general and about the recent initiative especially for the elections, the Facebook page ‘Have Your Say  Their mission is to keep people who don’t speak Dutch (yet) informed about what is happening in the city. Internationals can express their views and concerns on these pages too.

Milagros from CLO shared an experienced insight into how the outlook towards internationals has changed over the years. In her 28 years of living in the Netherlands, she remembers people seeing her as an immigrant, then as a foreigner which was replaced by international and of late “the expat”. An international from Turkey expressed her views on how the Dutch accept the Turkish.

Beena Arunraj, moderator of the 21 March, Have Your Say, Facebook page, and reporter of Eindhoven News expressed her concerns about the education system. She conveyed the problem facing the expat child in relation to the language of instruction in education in government schools. Bilingual curriculum education which culminates in an examination in both Dutch and English is essential to the expat children so that the students are not affected when they move abroad or when they continue to live in the Netherlands.

The political parties pitched their propaganda to the internationals gathered. The PvdA vouched to work on making the internationals feel welcome and they made a lovely gesture by handing out roses. While the CDA promised to keep a watchful eye on the finances of the city of Eindhoven. D66 was in favour of economic growth and equal rights. GroenLinks wants to save 20 to 30 percent of every new housing project for welfare housing (under 900 euro for the benefit of low-income groups) and true to their name would do everything in their might to protect the environment.