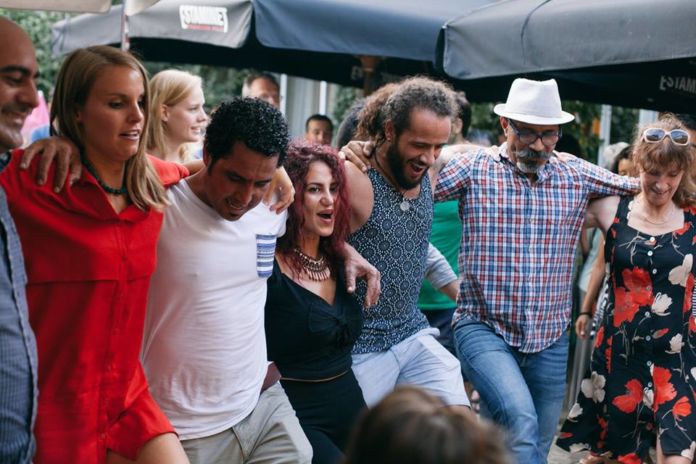 “New Neighbours Eindhoven”, is conceptualized and organized by Jeroen Van Aalst, a local schoolteacher, with help from his students, Syrian refugees, and local government.

It was an event meant to break the ice and encourage the building of a new community among unlikely and unfamiliar neighbors. On all of those counts, it seems to have been successful, and a warm and enjoyable event for everyone involved.

When I contacted Van Aalst via the New Neighbours Facebook page to ask him about the event, he enthusiastically shared about the process of planning the event from conception to execution. The idea came to him last February, he told me, and took several months to develop, including making the necessary connections within the Syrian refugee community living in and around Eindhoven. “I had seen a lot of negative news about refugees, and a lot of people saying negative things on social media, who probably had never met a refugee…. I thought it would be nice to have a day where refugees could meet with people in Eindhoven, see that they are human too. To show that our cultural differences can be enriching rather than threatening.” He noted that people in asylum centers are stuck, with nothing to do, and he wanted to organize an event where refugees could express themselves in a creative way, and where locals and refugees could share their cultures.

When organizing the event Van Aalst said it was challenging to find people to collaborate with. He had to “go find people, go to their homes, have conversations.” A Syrian woman he met at a Syrian festival in Tillburg was an important connection. “She knew many people doing music, having creative backgrounds. She could easily help connect me with people in the asylum center. It was hard to make appointments and gather people, especially due to the language barrier.”

He requested a subsidy from the city, which was approved. Some of his students, who are studying to be communications assistants, designed the artwork, and did interviews and promotions for the event.

“Food was an important aspect of event. We found a Syrian cook in the refugee center, who had a restaurant for 12 years that was bombed. He wants to start a new restaurant here in Holland. We found 4 cooks able to bring food to the event.”

The event, held in the garden of TAC (Temporary Art Centre), was attended by about 700 Syrian refugees, Dutch citizens and other internationals living in Eindhoven. Exhibits and activities included 2 musical acts, a Syrian artists exhibition, Syrian poetry reading, children’s activities provided by Vluchtelingenwerk (a Dutch organization helping refugees with integration projects and support), and the public premier of a documentary entitled Article 13.

Luca Paroni, an Italian R&D engineer who has been living and working in Eindhoven for five years, wanted to promote a conversation with and about the refugees living in The Netherlands. He’s spent the last year working on his independent documentary, Article 13, in which he follows the stories of two Syrian refugees who made it through the asylum process in The Netherlands, as well as documenting the plight and circumstances of those who do not make it through the process. The film also includes interviews with several politicians.

When I interviewed Paroni, he told me that he wanted to help people understand what refugees are facing. “People don’t know where refugees are in Eindhoven. You can go there. You can speak with them.”

(My intention with the film is to) “inform people what is the real situation and real issues that these people are facing. Most importantly, to help to avoid having inhumane reactions; ‘These people are dangerous;’ ‘people are going to take our jobs;’ ‘people will get raped.’ Who are these people? What’s their story? What’s their background?
Some are now just my friends. Same as meeting people from Greece, Italy, or Finland – we are all human beings.” Conversations were had among attendees after multiple showings of the film that day, and he says he received a lot of positive feedback.

The project was self-funded by Paroni. Any income derived from screening the documentary will be donated to a group of rejected asylum seekers in Amsterdam, WE ARE HERE, www.wijzijnhier.org.

Since I did not attend the New Neighbours event myself, Paroni offered me the opportunity to preview the documentary, even though it hasn’t been released publicly yet, other than for the one day that it was shown at the New Neighbours event. Indeed, I learned quite a bit about the process of applying for asylum in The Netherlands, the challenges and roadblocks asylum-seekers are facing, as well as the desperate situation faced by those who are refused asylum.
I look forward to attending a public event where I can engage in a post-showing Q&A session with Paroni and others in the community. Paroni is currently having conversations with various theaters and festivals about showing his film publicly. Dates and venues will be announced soon.

When I asked Van Aalst if there were any particularly memorable moments during the New Neighbours event, he told me there was a moment in the garden when he observed everyone sitting and speaking with each other. “The music was very good…. people were dancing, especially the Syrian men. They were doing traditional dances in a group. It was sort of like Carnaval – everyone was embracing each other; young, old, different nationalities.”

“When I thanked the cooks at the microphone – one of them was very keen on singing and asked if he could sing for a moment. It was very spontaneous. He improvised with the musicians.” He notes that the band was interested in Dutch music too, and played a very popular Dutch song.

Van Aalst and Paroni have both received positive feedback for their efforts; including many people who wish to get involved in future events. Perhaps the photos posted on the New Neighbours Facebook page tell the story best. The images beautifully captured an afternoon of dance, food, smiles, warm conversations and fellowship.

Both intend to continue their efforts to promote compassion, collaboration, and accurate understanding of the situation refugees are faced with in the Netherlands. When I asked Paroni about the reason for his passion and motivation for this project, he didn’t hesitate with his reply. “If you treat people in the right way, they will treat you in the right way as well.”

For their efforts, I genuinely admire the collaboration that occurred among various aspects of the local and international communities to begin to forge a pathway toward new relationships, understanding and compassion. These initiatives dare us to hold our gaze beyond the fear we may be feeling of the unknown and uncertainty of the future. Indeed the future is uncertain for all of us; perhaps that is the one thing we can all count on in this human experience. For me it is inspiring, hopeful and a compelling reason to be alive; to fully participate during these trying times; to brave the prospect of a conversation; to reach out and touch with sensitivity and vulnerability someone whom we know nothing about; to imagine what solutions, friendships or common ground we may find.

7 October 2022
Transavia is investing in Lucy, a flight company that wants to fly with fully electric aircraft. In 2025, the first plane should take off...