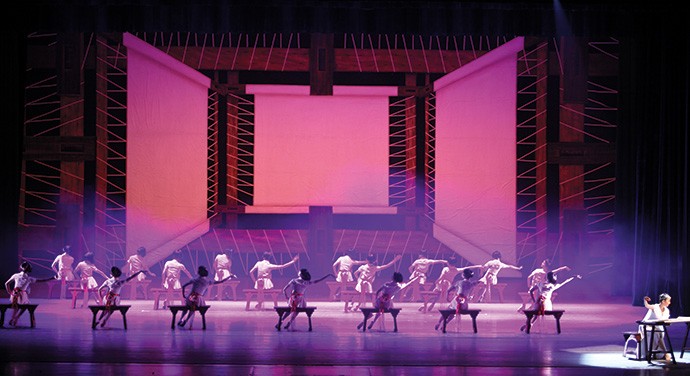 A special Chinese evening, produced by the Dutch dance company Groundbreakers. The Groundbreakers’ performances are known for their narrative, almost cinematic and theatrical language, where emotions in the dance are highly tangible. This evening, the group presents ‘De Kraaiman’, a modern-day choreography that brings to life one of the famous stories by seventeenth-century writer Pu Songling. Along with spectacular live animations, dancers from China and the Netherlands take you into a hallucinative world ruled by immortal birds and gods. A truly unique collaboration between Dutch and Chinese dance makers.

The second piece, ‘De Borduurster’ by Wuxi Performing Arts Group, is a special blend of classical and Chinese ballet. It tells the legendary tale of a girl Xiu Niang, who fights for the freedom of women.

The evening ends with a lecture by author Lulu Wang about the eighteenth-century classical Chinese ghost stories about the supernatural by writer Pu Songling. Lulu Wang (1960) came to the Netherlands at the age of 25. She debuted in 1997 with the novel Het lelietheater, which became a huge success, winning the Gouden Ezelsoor literary award in 1998.

8 December 2022
Eindhoven and Geldrop-Mierlo honored various volunteers on Wednesday for their efforts on Volunteer Day. Activities were organized and prizes awarded. A volunteer party with a...